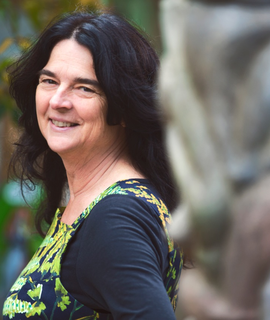 Lyndall’s interest in Astrology began in the 1980’s and she gained her Certificate in Astrology in 1985.Over the course of 30 years, Lyndall has established her own business based in Daylesford, Victoria and South Yarra, Melbourne and online nationally and international.

Lyndall has developed a theraputic and experiencial technique of Astrology which she has called Shamanic Astrology.

She has written five publications on Shamanic Astrology, Tarot and Astrological Ritual plus numerous articles and Tarot Deck reviews that can be read on her web site. The process of writing her astrology workbooks began as she sat on the side of the sandpit whilst her three children played; she wrote.

Lyndall has taught Astrology in many situations over the course of twenty-nine years. Beginning within Lancaster County Prison USA in 1985, Lyndall lead workshops at the Rainbow Festivals of 1986-1991, Descent of Innanna Retreat for Womyn 1991 and independently from 1991.Her course outlines can also be viewed online and she now teaches online both locally and overseas.

Lyndall imports beautiful and unusual Tarot decks and writes reviews on them before selling them to homes where she knows they will be loved. She has an avid interest in the artists behind the Tarot and is presently locating them hoping to meet them and write on the art behind Tarot.

Lyndall has brought together her passion for astrology, tarot, wicca, ritual, meditation, and personal development in a unique and grounded way. This has been a lifetimes work. Lyndall considers all her writings are a work in progress, nothing is ever finished she constantly builds on her concepts as she studies so her publications  keep growing.

Tarot and the Astrology Houses

Introduction to Shamanism 1 Tools for the Spirit

Shamanism 3 Finding the Healer Within